Optimal Leadership Team Size: Bigger May Not Be Better 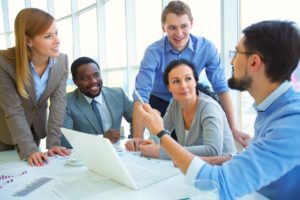 In the fast paced world of business it seems as though the landscape is constantly changing. Technologies evolve rapidly, policies shift with changing political climates, consumer interests fluctuate, and economies boom and bust. Regardless what the change is, things never get simpler.

Proof of this change can be found in the ever expanding C-Suite, which has grown as companies try to adapt. It used to be that the executive trilogy of a company consisted of the CEO, CFO, and COO, but this management team has grown in the past couple of decades. Now we see things like Chief Technology Officer, Chief Marketing Officer, Chief Information Officer, Chief HR Officer, Chief Strategy Officer, and even Chief Happiness Officers. The Harvard Business Review analyzes this team size phenomenon, charting its history in The Ballooning Executive Team.

The article’s author examines the difficulties resulting from this executive team growth, especially in relation to the CEO, who is meant to be the leader and visionary for a company but is often finding herself at the mercy of too many other managers:

“…they find themselves more and more often acting as a referee. CEOs have always had to address conflicts between team members. But this task has grown as each new member comes aboard with a strategy to implement and an expectation that their priorities supersede all others.”

As facilitators of numerous strategy sessions for clients, we have seen this expansion of the C-Suite trickle down to other leadership teams in organizations with the same deleterious effects. The bigger the team size, the more difficult it becomes to achieve consensus and find direction. Because it’s more difficult to come to an agreement, when a large group finally decides on an idea by simple majority, meeting participants on the losing end often feel a bit disgruntled and subsequently have less buy in to the winning plan. When it comes to developing a guiding vision – a key job of leadership teams – this can be quite counter-productive.

Imagine an alternative scenario where a manager isn’t a part of the leadership team creating the vision, but instead is told what the vision is and then tasked with executing on it. This simplifies his relationship with the plan. Leadership shared amongst too many people isn’t leadership – it’s just convoluted. This isn’t to say that other managers shouldn’t be included in idea generation phases, but simply that the actual decision making around high-level leadership issues should be left to a select few to streamline the process and help make the vision more cohesive.

There have been numerous studies on optimal group size and while there are many factors that go into putting together a team – like the objectives and expertise needed – one study investigating the topic determined the number to be about 5. In the study, organizers assigned participants to different sized teams and then gave them a group assignment to complete. After the assignment was completed, study participants were asked if they felt their team was too large or small to complete the task effectively and 5 roughly marked the intersection between people’s satisfaction and group size. Interestingly, this result also matches up with another philosophy that it’s best to have an odd number of team members to avoid split decisions.

Smaller, more streamlined groups help keep the number of relationship links lower (these are the number of individual, one-on-one relationships in the group) leading to less social complexity. If you want to get nerdy, the number of these links can be calculated as follows:

To understand how quickly these interaction links grow, note that a team size of 5 has 10 links whereas a group of 7 has 21. So adding just two people has more than doubled the amount of interpersonal relationships in the mix.

Moreover, on the opposite end of the spectrum from adding too many different viewpoints and personal agendas to the mix, there’s also the phenomena of social loafing. In a nutshell, the more people you add into the group, the less each individual member tends to contribute to the team. This effect was noted in the famous rope pulling experiments by Max Ringelmann, a French professor who found that individuals tasked with pulling on a rope to measure force pull less hard the bigger the group gets (imagine a game of tug o’ war).

Of course there is no universal formula for assembling the perfect group for a task, but being aware of the potential effects of increasing team size is important. Likewise, there are other really important factors, too, such as emotional intelligence of team members and relevance or diversity of experience. All of the above should be taken into account when it comes to creating effective leadership teams.