The Power of Storytelling in Business 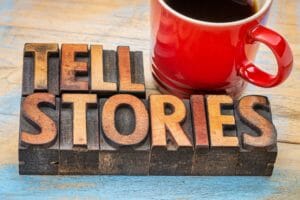 Most employees think that storytelling is something reserved for books and the big screen, but this belief is robbing companies of one of humanity’s greatest tools. Stories have been used from the dawn of humankind to pass down valuable information and engage people’s attention. Yet somehow stories still aren’t utilized by business people to help aid them in their work.

This is likely because we mistakenly think of stories as purely entertainment. Stories can be colorful and emotional, and sometimes they are embellished to make them come to life in the minds of the audience. Because of this, they can seem too touchy-feely for the business world. Corporate America has a way of making us feel like things should always be utilitarian and straight-to-the-point – that reports should focus strictly on facts and findings, that Powerpoint presentations should stick to numbers, pie-charts, and projections. HR handbooks outlining company culture should be easily digestible bulleted lists.

While these efforts feel “professional” as we’ve come to define the word, they miss out on a very important component: narrative. This is the special sauce that makes things interesting. And if you want to have any hope of being persuasive, you need to be interesting. Numbers, charts, and factoids won’t do it.

Charities know this. Have you ever received a direct mailing from a charity that focuses just on the numbers? The number of sea turtles caught in nets, or the percentage of malnourished children? No – they focus on the narrative because they know numbers aren’t enough to motivate us to take action, they know they need to also move us emotionally.

This is the story of Laura, an endangered leatherback turtle who has to migrate 3000 miles through turbulent, trash laden oceans while dodging unforgiving trawler nets and toothy tiger sharks just to lay her eggs on a beach crawling with predators ready to poach her babies. And it’s also the story of how our organization makes Laura’s life just a little bit easier, and gives her little hatchlings a fighting chance.

Imagine receiving that story versus a list of numbers and statistics. Which would move you to action and a healthy donation?

Screenwriting guru Robert McKee, whose seminars have been attended by well over one hundred Emmy winners and who has been a consultant on numerous high-level business presentations, advises focusing on the entire story arc. People want to know the drama. Antagonists, challenges, difficulties, and unforeseen events all create anticipation in the audience for an eventual bright light at the end of the proverbial tunnel, a solution to the problem at hand.

In an interview with the Harvard Business Review McKee said, “as a storyteller, you want to position the problems in the foreground and then show how you’ve overcome them. When you tell the story of your struggles against real antagonists, your audience sees you as an exciting, dynamic person. And I know that the storytelling method works, because after I consulted with a dozen corporations whose principals told exciting stories to Wall Street, they all got their money.”

Storytelling is as much about conveying information as it is about persuasion. It’s getting people on board with you. This applies just as much to a startup pitching VC firms for investment in their technology as it does to solidifying a company’s culture.

AirB&B continues to build upon the story of how it’s platform allows people to better connect with the local culture by staying with one of its hosts versus a chain hotel. Likewise, the story of the record-breaking 10-hour long customer service call at Zappos was etched into the company mythos, further cementing the customer-centric culture within the online retailer, accomplishing much more than a bullet point in a mission statement ever could.

Another tremendous story is outlined in the book The Heart of Change by John Kotter and Dan Cohen. In it an employee named John Stenger was on a mission to save his company money by tackling spending waste and inefficiencies. Despite having data to support his theories about overspending, he decided to home in on something that would tell a story instead of just presenting spreadsheets and graphs. He knew that almost all of his company’s different manufacturing plants were ordering gloves from different vendors for wildly different prices, so he had an intern track them all down and get one of each variety sent to his office – all 424 of them! Stenger then brought them to the boardroom and piled them on the beautiful conference table with price tags attached. Unsurprisingly, company executives were in shock. Stenger used the gloves to tell a story, one that wouldn’t have had the same visceral impact if it were presented merely as numbers. Eventually, the company turned the exhibit into a traveling roadshow as a way to share the story with other employees and curb the insanity, getting everyone onboard with more strategic procurement efforts.

A narrative is powerful. Stories are humanistic, appealing to our emotional brains and adding life to facts, figures, and data. By embracing storytelling within your organization, you can tap into their inherent power to motivate, persuade, unify, and move both coworkers and customers.

Want to learn more? Check out our Storytelling workshop.